Robin Rents was established in 1966 by Bill Robinson and specializes in equipment rental serving local businesses, contractors, and home owners. Robin Rents was originally located on Whitesburg Drive in Huntsville, Alabama and moved to the current South Parkway location near Airport Road in 1984. Robin Rents was purchased by the Birdwell family in 2003. Ronny Birdwell and his family, along with their commitment to the community of North Alabama, have expanded the business to five locations in the Tennessee Valley.

Opened in August of 2016, the Decatur location serves the Decatur, AL area. It is centrally located to the City of Decatur, City of Priceville, City of Moulton, and City of Hartselle.

Robin Rents newest location in Athens opened in March 2021. It is located just outside of downtown Athens on the corner of Lucas Ferry Rd and US Highway 72. Serving the Athens, Florence and Muscle Shoals area. The Athens location is at 2015 US Hwy 72 West, Athens, AL.

Robin Rents holds a high standard of moral values along with a family atmosphere. We also believe in a willingness to serve our community and our fellow man, to the furtherance of our great country, the United States of America.

Although we update our website regularly, all online prices are subject to change. To get final pricing please call a store near you. Dismiss 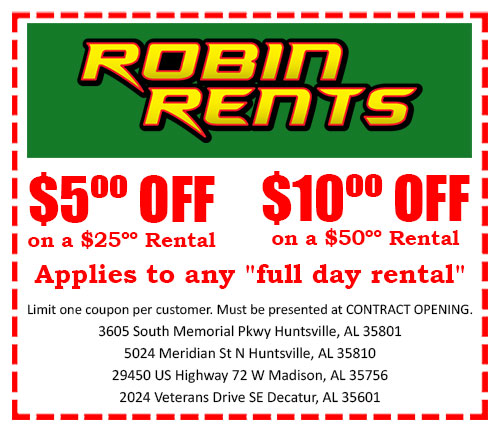 It makes no difference whether you are a first timer or one of our many established customers. It's our way of evaluating the efficiency of our e-commerce site. Simply show this page to one of the rental professionals on your next visit. A quick call in advance, to the respective location, will reserve the equipment you want so that it will be available when you want it.

Show This Page - Receive a Complimentary Robin Rents Discount. Limit one coupon per customer and it must be presented at CONTRACT OPENING.